In 2021, we did not travel to the United States for the Nationals, but to Nuremberg to participate in the online Nationals. We made it to the semi-finals with two projects and were able to successfully compete against the other teams. The conference year 2020 unfortunately took unexpected turns due to the beginning of the Corona pandemic. Our commitment and time only paid off in experience as a team, as the Nationals were canceled because of the pandemic. Nevertheless, we used the time to work on our techniques and to grow together as a team. In 2019 we participated for the first time in the onsite project Cybersecurity and reached the 1st place. We made it to the top ten with Webmaster and Coding. We surprisingly outperformed our previous year's result. With 3 first places and some top ten places it was one of the most successful years since the foundation of Ostwald TSA and that despite such a young team. 2017 was a very special year for us. Thanks to the great experience of the individual members, we were able to achieve 7 top 10 placements in Orlando, Florida. For many of our members, this was the last National Conference, so we have increased our efforts to recruit young students. We are pleased to have won the Sparkasse as another sponsor. After our longtime advisor and attendant Mr. Januszewski had left our chapter one year before, Mr. Schwieger took his place. Also, we were able to reach an outstanding second place with our Webmaster project and a top ten placing with Fashion Design.

The campaign for membership growth from the previous year was a great success. We welcomed 7 new members to our team and attended, during the National TSA Conference 2015, Events Ostwald TSA never tried on a national level before. Furthermore it was the first National Conference for more than half of our delegation. 2015 was a year full of new experiences. Sadly it was the last Conference for our advisor Mr. Januszewski who guided us through 10 years of Ostwald TSA. Mr. Brunsch became our new advisor. In 2014 Ostwald TSA was able to attend the National TSA Conference with a bigger team compared to the previous years. Unfortunately more than half of our members had to leave Ostwald TSA after the Conference, due to graduation. Because of that we prepared a campaign to advertise our chapter to younger students. Ostwald TSA continued integrating young and new members. Even though the conference in Orlando, Florida, was not as successful as the team only achieved a top-five placement in Webmaster, many projects to be proud of were created and new bonds in the team were formed. After more than half of members of the chapter had to leave TSA, mostly due to graduation, Ostwald TSA struggled organizing itself again. However, the team gained many new members and managed to achieve 3 top ten places in Nashville. In this year Ostwald TSA had its most successful National Conference and achieved five cups as well as three more top-ten awards. After we did a lot of advertisement for our chapter many new applicants came to show us their skills so our team grew to an amount of 20 members. Also we had a very successful Conference in Baltimore where we surprisingly reached a first price in Digital Video Production and got awarded with seven other prices in the top-ten. Abingdon High School from Virgina and Ostwald TSA are establishing an international exchange program. We accepted the challenge of the project "Film" (Digital Video Production) the first time which resulted in a short film called "Jump Before You Fall" which could unfortunately not reach the top-ten. Even though Ostwald TSA returned from Denver, Colorado with one first place and three top ten placements. 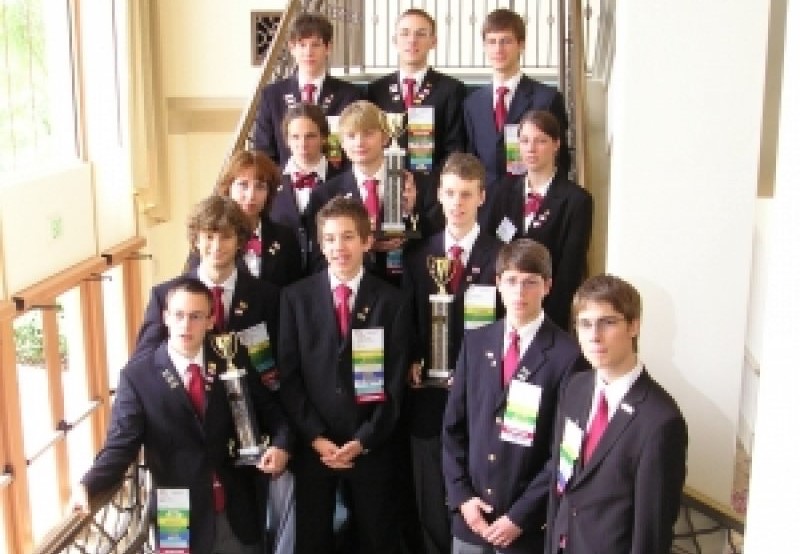 With three second ranks and three more top-ten placements, Orlando 2008 was a very successful year for Ostwald TSA. Our team was very happy about it. Stephan Max, until then the most successful member of Ostwald TSA, is leaving our chapter after graduating from high-school. Ostwald TSA furthermore launched a cooperation with the Fraunhofer Institute for Cell Therapy and Immunology IZI in Leipzig. Mr. Häcker became an advisor of Ostwald TSA, supporting Mr. Stelzer with the coordination of the chapter. With four students taking part in our third National Conference in Orlando, Ostwald TSA was able to achieve a first place and another top-ten placement. Ostwald TSA was founded and four students with Mr. Stelzer took part in their first National Conference in Richmond.

After completing his gap year, Reinhard Höll brought the TSA idea to Germany.